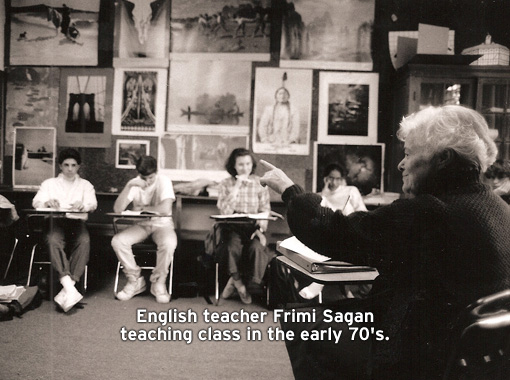 George Kinsey
Class of 1963
"[ESB faculty member] Fred Hutchins showed how history, science, math and all the other subjects that school taught were part of a well-rounded education. Not only would what one learned at ESB be used throughout life, but also that life was to be a continuous learning process."


Susan Devine-Lempert
Class of 1974
"I have great memories of my teachers and directors, [including] Mrs. Stueder and Mrs. Robinson, who was known for proclaiming, 'Well, when I was at The Academy...' at the drop of a hat, referring to The American Academy of Dramatic Arts in NYC, which did seem pretty impressive to all of us. Mr. Carlton Colyer was a great director and later a good friend and had been a professional actor. And Malcolm Duffy, whose knowledge and love of theater was always inspirational, taught a great class senior year in which a group of us studied play scripts and then went on field trips to see [the plays in] NYC."


Charlotte Merriam Cole
Class of 1970
"Without question, my clearest and happiest memories are of the Music Program, under the direction of Mr. Joseph Erwin. Choral Club, Choir, and the music classes he instructed were the highlights of my week at Dwight. He took students into New York City to the Metropolitan Opera, he led us in Christmas caroling in Englewood, he listened to us, and encouraged us. Mr. Erwin was positive, encouraging, and had a deep respect for each student. This was readily apparent in the way that he interacted with each young woman at school. He was the best! Mrs. Sagan, in the English Department, was also a favorite teacher. She, too, had a great respect for each student. She encouraged us, and always worked to bring out the best in each of us."